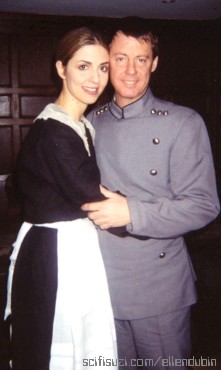 Ellen Dubin as Emilia the maid and Dan Lett as Mario in TAMARA
Photographer: Nir Bareket 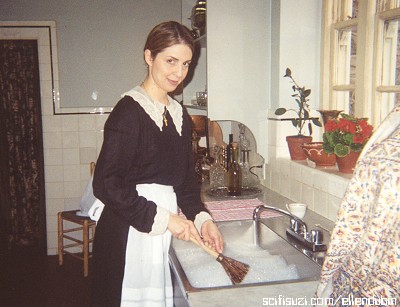 Ellen  as Emilia the Italian maid in TAMARA at the World Theater Festival.
Photographer: Nir Bareket

Tamara is not just another play
Performance takes place in a mansion.

The secret is to keep moving.

If you decide to see Tamara, which opened Sunday night at Graydon Hall Manor, you might be well advised (for the first act, anyway) to do as I did and follow Ellen Dubin, who plays Emilia Pavese, the kleptomanical housemaid of easy morals.

Boy, does she move!

I spent most of the show’s first hour running up and down stairs, dashing in and out of rooms, pushing past people and grasping for bits of information.

That was the fun part.

But in Act II when I actually had to heed the plot, characters and dialogue, it got a lot less interesting.

John Krizanc’s play is a melodramatic concoction set in the Italy of 1927 when Mussolini’s fascists were solidifying their hold on the country.

It focuses on poet Gabriele D’Annunzio and the kaleidoscope of political and sexual intrigue that swirls around him.

But you don’t go to Tamara for the story. You go for how it’s told. This living movie is set not in a theatre, but all over a spacious mansion, and although every room is alive with activity for most of the evening, you have to choose which of 10 characters you’re going to follow.

Consequently, there is no such thing as “a right way” to see the show. Everyone is going to miss something, and that’s just how it goes. So should you see it?

Well, the strength of Tamara is in its clever concept and bravura execution, courtesy of director Richard Rose, rather than in its incredibly feeble script.

Krizanc writes here in three styles, none of them all that admirable:

The epigrammatic: “Perhaps the house has gotten bigger. Perhaps we’ve gotten smaller.” Everybody starts to sound like they’re on a Fascist version of Gilmore Girls.

The self-analytical: “Rome! Venice! I don’t care about you men and your cities.” Characters keep taking their own temperatures as though they were in an unstaffed walk-in clinic.

The narrative: Lines such as, “As long as Finzi thinks Dante doesn’t know about Mario and me,” are just as hard to follow as they seem to be and there’s an awful lot of them.

No matter how kinetic the staging is, a text like this eventually slows to a leaden crawl.

The actors that I spent the most time with varied widely in quality. Ellen Dubin as the housemaid was solidly and subtly in character throughout, while Victor Ertmanis huffed and growled to fine effect as a sinister fascist.

On the other hand, Roger McKeen grew dull rather quickly as the faithful Dante and Dan Lett lacked the charm and sexual magnetism necessary to play the chauffeur Mario.

I grew to wonder if the whole project suffered from a serious internal flaw. When actors are going to be playing vital scenes less than a foot away from you, it might be a better idea if they were telling a subtle and delicate story, rather than a loud and boisterous one.

World Stage’s Canadian content section kicks off with a revival of Tamara: officially a play by John Krizanc, but better known as the “legendary environmental theatre event” (the press release’s precisely accurate description) that effectively launched Richard Rose’s Necessary Angel company in 1981. Rose has now moved on to become director of the Tarragon, so this is his full-circle farewell.

As everyone knows, the show unfolds before a limited audience in a stately house: all over it, since the actors — 10 of them — keep splitting up, moving off into different rooms in different combinations, and we can decide which of them to follow. We become — not our own dramatists, exactly, since the script has been written and we can’t amend it — but our own story editors. And of course, with the action multiplying amoebically, however we choose, we miss a lot. At the same time, we maintain the perverse belief that the bits we saw were the most important ones.

The effect, however close we may get to the actors, is not to make the event more real but to make it more artificial. For a start, the house is standing in for the Italian mansion of Gabriele d’Annunzio, poet and icon, in 1927. A possible but unpredictable Fascist, d’Annunzio is being wooed by Mussolini to give legitimacy to his regime. On this particular night, d’Annunzio awaits a visit from the Polish artist Tamara de Lempicka, who is going to paint him and whom he wants to seduce. (Given the slippery political climate, a possible theme, for her picture or for the play itself, might be D’Annunzio Denounced.) Others in residence are d’Annunzio’s housekeeper, a pianist who is also his former mistress, an aspiring ballerina who wants his patronage, and an all-purpose male artist. There is also a brutally mannered policeman, keeping tabs for Il Duce. Below stairs, sometimes literally, are a valet, a chauffeur and a maid. Both echelons may contain spies, probably Communists. Two separate characters turn out to be Jewish ex-gondoliers.

It’s a magnificent gimmick. It’s impossible not to be awed by the production’s logistics, by its sumptuous layout, and by its sheer synchronicity. It’s impossible, too, not to be tantalized by the thought of what you might be missing (not to mention the screams, gunshots and door-slams that always seem to be going on somewhere else, and the vintage Rolls in waiting at the front door) and to at least consider coming again and making other choices.

It’s seldom given to an audience to stand in a kitchen and watch, at close quarters, an actor preparing and then eating a frittata, as John Gilbert’s d’Annunzio does here. After he’d performed this feat, I rather drifted away from the Commandante (as everybody calls him), so, come the end of the piece, I was unsure what the upshot of his story was, or why he was thought to be so important. I realized I had seen even less of the title figure; indeed, I wondered whether her status was some kind of joke on the theme of hope and meaning deferred. (Tamara and Tamara and Tamara.) But no, I’m sure she must have been existing like mad, even when out of my sight. On the other hand, I remember spending more time with them when, as a tourist, I saw the original production, and I didn’t find them all that compelling even then. I do recall that the actor playing d’Annunzio was a lot closer to the dwarfish historical figure than is the bluff, upstanding Gilbert, but neither player was able to bring him to life

This time, while aiming to spread my favours as equally as possible, I ended up spending most time in the company of Victor Ertmanis’ Fascist cop, and of Ellen Dubin as the kind of maid whom everybody ought to have and whom most, as far as I could tell, had. There was much plotting and counter-plotting going on here, and a lot of angry or ironic statements about the strange people whom politics can, figuratively or otherwise, put you in bed with. Yes, some surprising or just misguided people supported Fascism. But this isn’t news, and the play doesn’t make it new.

When the show was first done, Rose and Krizanc announced that they were commenting on Fascism by reducing the element of Fascism in the theatrical experience itself — i.e., by giving the audience some choice. However, all of Rose’s subsequent productions that I’ve seen have had a perfectly orthodox relationship between show and audience, so either he’s dropped this dubious theory or he’s surrendered to Fascism himself. Krizanc, since writing Tamara, has not had a very obtrusive theatrical career, but he has written for film and television, in both of which, of course, the choosing is done by the camera.

His writing here is melodramatic going on portentous. “I know the difference between an artist and a whore,” says d’Annunzio. “A whore has better morals.” The ballerina, who has exhibited racist tendencies, is told: “You will never be a modern dancer; you can move, but you’re not free.” The style, or lack of it, affects the acting. The performers, with a couple of exceptions, are very assured, but they’re mostly engaged in striking attitudes. This kind of intimate exposure is supposed, theoretically, to lead to acting of rare truthfulness (it did a couple of years ago in Paula and Karl), but here it’s up-close and impersonal.

Halfway through, and again at the end, the valet brings us all back together to inquire solicitously as to how we’re getting on. At such moments, the show takes on a strong resemblance to Mysteriously Yours, the whodunit dinner theatre, which is every bit as interactive and usually better written. You get a full meal, too, though Tamara does offer wine, both preparatory and dessert, coffee and cake. I had fond memories of that cake from the ’81 production; in fact, I thought it was the artistic highlight, not only of the production but of the entire one-time-only Toronto Theatre festival, of which it formed a part. In the intervening years, the standard of the patisserie has gone down but the performance level has gone up. That’s true not only of Tamara but of the Canadian theatre in general. You have to hand it to Tamara — it must be the most successful play nobody has ever seen.