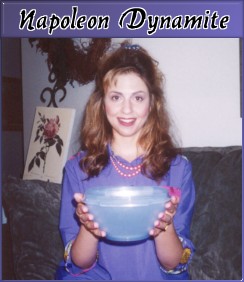 Napoleon Dynamite Gallery (then and now)

Napoleon Dynamite: Where Are They Now

NAPOLEON DYNAMITE HAS BEEN NOMINATED FOR THE VERY PRESTIGIOUS SATELLITE AWARD FOR BEST COMEDY FILM.

In addition to being an Official Selection at Sundance 2004 this quirky comedy has been nominated for a 10th Annual Critics Choice Award for most popular film (beat out by Spiderman 2), The Independent Spirit Award and International Critics – Satellite Award.

Alexander Payne’s Sideways is the favourite to sweep the board at the Independent Spirit Awards after it was nominated for six gongs yesterday, including best feature, best actor, best screenplay and best director.

The awards, intended to promote offbeat features, are open to films whose budget comes in under $15m (£7.8m) – although the rules were bent to accommodate Sideways, whose costs were between $16m and $17m.

In close second is Maria Full of Grace, the critically acclaimed portrait of a Colombian woman who becomes a drug mule, which collected five nominations including best actress, best first screenplay and best supporting actress.

Five films will battle it out for the best feature gong: Napoleon Dynamite, about a geeky school misfit; Garden State, the story of a Hollywood actor’s homecoming to New Jersey; The Woodsman, a drama about an out-of jail paedophile starring Kevin Bacon; Brother to Brother, in which a gay black man discovers the Harlem Renaissance; and Saints and Soldiers, a second world war action drama.

The winners will be announced on February 26 in Los Angeles.

Fox Home Entertainment have announced the Region 1 DVD release of Napoleon Dynamite for 21st December 2004 priced at $29.98. Napoleon Dynamite is a new kind of hero, complete with a tight red ‘fro, sweet moon boots, and skills that can’t be topped. Napoleon spends his days drawing mythical beasts, duking it out with his brother, Kip, and avoiding his scheming Uncle Rico. When two new friends enter Napoleon’s life – shy Deb and mustachioed Pedro – the trio launches a campaign to elect Pedro for class president and make the student body’s wildest dreams come true. But if Pedro is to beat stuck-up Summer, Napoleon will have to unleash his secret weapon…

Presented on a double-sided disc with both Widescreen and Full Screen transfers you will find the following bonus features: 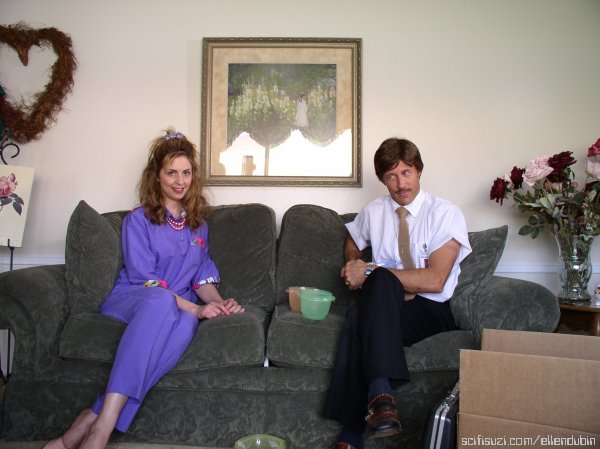 VANCOUVER (CP) – Napoleon Dynamite, the quirky, black comedy that had even the critics rolling in the aisles at the Sundance Film Festival hits U.S. screens Friday and begins preview screenings in Canada a week later.

Set in the rural town of Preston, Idaho, the film features the title character with his red afro, moon boots and illegal government ninja moves helping a friend secure a student council spot.

After her Tupperware research for the role, Dubin can now spot a fake Tupperware burp at 50 paces.

While she waits for the film’s release, Dubin is out looking for a copy of Lifetime Guarantee: Phranc’s Adventures in Plastic, the 2001 documentary about how the Jewish lesbian punk folk singer Phranc became the top Tupperware salesperson in the U.S.

Dubin said if the ultra-critical Sundance press corps liked the film, then the public will love it as Napoleon Dynamite is a nerd everyone can click with.

“We’ve all got a nerd in us,” Dubin said. “I love stories of underdogs.”

The Independent Film titled “Napoleon Dynamite” has been chosen to compete with 15 other films for The Dramatic Competition of 2004 The Sundance Festival Jan. 15-25 in Park City, Utah. Ellen was asked by the producer, Chris Wyatt, to fly down to Utah last summer to perform in the cameo role of “Ilene” for Napoleon Dynamite.

Co-stars in the film include Diedrich Bader (Oswald on TV’s “THE DREW CAREY SHOW”) as Rex, a hopelessly uncoordinated martial arts instructor; Tina Majorino (Enola from “WATERWORLD”) as Napoleon’s nerdy friend Deb; Efren Ramirez (who has appeared in “KAZAAM” and “RAVE”) as Pedro, the new boy in school; Shawndrella Avery (a regular on the UPN sitcom “ONE ON ONE”) as LaFawnduh, an out of town heartthrob; Ellen Dubin (from the Sci-Fi Channel’s “LEXX”) as Ilene, a deranged soccer mom; and renowned female body builder Carmen Brady (1999 “overall winner” at the NPC Masters National Championships) as Starla, Rex’s loving wife.

Ellen’s comedic cameo as the sweet perky housewife, Ilene, will sure to make her fans laugh. She enjoyed returning to comedy.